So I am going to try to make this quick because I have to get up at three am tomorrow for my flight out to AZ.

It was my last race in the Midwest for at least 5 weeks or so and I wanted to make it a good one, because my last race wasn’t so stellar.

I pretty much knew it was going to be a tough one with all of the great fire power around, but to add some nuclear fire power on top of the field some of our local/national/world legends decided to show up today as well. I don’t often get to race with Steve Tilford and Brian Jensen, but what I do know is that when you do get the opportunity to race with them you know its going to be a tough one. 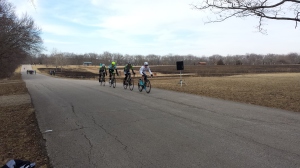 The race was pretty firey from the very beginning with a lot of powerful moves getting exchanged throughout the race. I knew that a breakaway had some really strong potential of getting away, so I made sure that I was in most of the moves.

Almost right away probably the most promising breakaway of the day I was able to jump across into was with Brian Jensen and Kent Woermann Bill Stolte (sorry if I misspelled that) which like I said was a really good move and we had a huge gap on the field but no one really wanted to work together and we busted a great move. I hate it when a great move dosn’t get utilized. 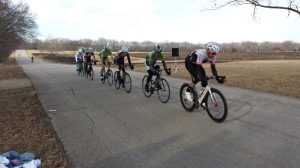 Anyways, for the rest of the race I found my way into a bunch of moves and sure enough no one would was willing to make it work. Seeing as though I had no teammates in this race I thought I should not be the one to drive the break because these guys are smart and vicious enough to counter a tired rider.

We did at one point midway in the race end up with what I thought was the perfect break given the combo of riders and teams associated with it, but even that imploded!

With about 8 laps to go I clipped a pedal and shot my bike hard almost out from under me. Thank the lord I didn’t go down but it messed up my back wheel and sent it out of true. It sucked that that happend but very thankful not to have gone down.

So eventually the peloton got whittled down to a small group of riders. It ended up being a sprint finish with two guys who did a solo move off the front with two to go, catching me flat footed preparing for a bunch sprint. I suppose it was kind of a rooking mistake but Ill be ready next time. I finished with whats was left of the small group sprint and felt pretty good about the overall race.

On a side note, some rider with Velotek, who is about forty plus in age, riding what I believe was a black and white Trek (not totally sure about the bike), decided he thought I should take a pull on the front to bring back a break.

Loogie Stain on My Fork

Get this…he decided that my refusal to get on the front and waste a bullet for him was an ignorant decision and for that it deserve a fair punishment for it. So what did he do? He Looks right at me and hocks a loogie right on my bike.

For starters I have no teammates in the race. There were three big teams present. Guys would have attacked me the second I got up there and started pulling and got tired.

So it makes absolutely no sense for me to take a pull for him. So I don’t know what mature adult spits on another “JUNIOR’S BIKE”, over a tactical decision in a race, but I suppose if the punishment fits the crime so be it.

No, actually…freakin grow up and act your age, plus you are representing your team, so I am sure they are all very proud of you and your decision, can’t wait to race with you again (SARCASM). #growup #actyourage #realmature #UMAD #stupid #cleanmybike #loser