So I had another three hour ride I had to do on the rollers today, which was pretty brutal. I am really considering buying a shack over in Cali and just riding my bike all day there.

The ride was pretty agonizing because it was laundry day and the washing machines were running which makes the room hot and miserable. Basically, it was three hours of me being bored on the rollers and that about sums up my ride.

Anyways, it was the day that many have waited for…Super Bowl Sunday. Just like everyone else I was pretty excited to see the game. I decided that I was going to pick Seattle to win the game just because defenses win Super Bowls and I like how they play old school smash mouth football.

For those of you that don’t like how Seattle trash talk and all of that, I say get over it. There is nothing more fun to see guys who are passionate and excited to play and you will always see that carry over in games. Plus it makes it fun to watch because they are fired up.

The other thing I saw a lot of talking about Richard Sherman’s interview about Michael Crabtree and I have to say. I think that it is so funny how people get so worked up about little things like this. First off I thought it was awesome that he said what he said because it was funny. Second off why do you think they went and interviewed him right after the game…for the drama. Third when you are playing a game, with such a heated rivalry, what would you expect to get from an interview right after the game. I believe if you wanted a sound interview let the guy cool off a bit.

Moving on, I did not expect a huge blow out, especially from a Denver offense that has broken basically every offensive scoring record this season. I was expecting a fairly good battle to happen. Unfortunately the entire game could be summed up by Denver’s first play (for those of you that don’t know it was a safety). It just looked as though Denver couldn’t execute any plays and Seattle took advantage of that. That is why the MVP of the game was a linebacker because the Seattle defense crushed the broncos and won the game for their team. 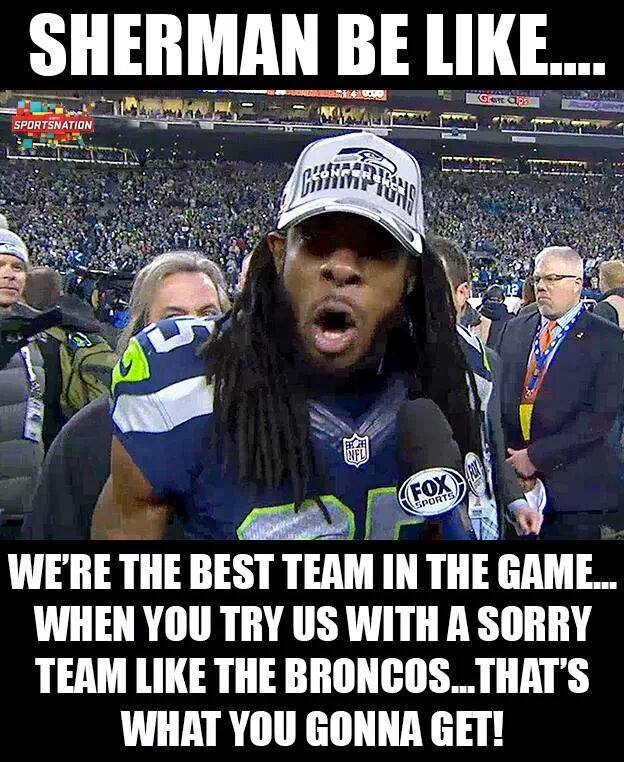 Besides that I did get some good news today and some bad news. The good news is that I have been rewarded for my six plus hours on the rollers the weekend, with a snowday tomorrow! The bad news is that we have a tradition around here of going to Wingbusters and eating wings on Super Bowl Sunday. Unfortunately Wingbusters has closed for good, I will be in mourning for the next week.

So I had just a two hour recovery ride today and after the intervals that I had yesterday the legs felt really tight, but thats pretty typical for muscles trying to repair themselves.

It was very cold outside, I believe it was like 15 degrees out and I tend to draw the line at 20 degrees, just because I do not have anything for my feet that will keep my feet warm under twenty.

That meant that I would be on the rollers today, which I was fine with but I am pretty done with riding inside after all the endless hours I have put on those things.

Anyways, I came home and I found a note from UPS that said that they brought my new bike by but because no one was home they had to hold it another night. However, they did stress on the note that they will be bringing the bike tomorrow, so I am very excited to see this new beast.

By the way if they would have called the snow day today at my school I could have gotten my bike today…just saying.

Tomorrow looks to be pretty awesome because I will be riding my new Argon 18 Gallium Pro Team Winded edition bike and by the looks of the pictures she is beautiful.

I will make sure to post some pictures of it tomorrow and a full review of the bike.

This is a pic of my bike before it shipped

With that said, I am still trying to figure out what the Pro Bowl has now turned into. Like it was stupid when they changed it to where the Pro Bowl was before the Super Bowl instead of after. But now they are allowing retired players to draft teams? I just think that its just pointless game that the NFL uses to get more money off of….I just have no idea what it is anymore.

Error: Twitter did not respond. Please wait a few minutes and refresh this page.